The Draft South East Queensland Regional Plan has been released and is subject to further consultation until midnight on Friday the 3rd of March 2017. ShapingSEQ provides a framework for managing the region's growth over the next 25 years and entails a 50 year vision for the South East Queensland Region.  Extensive consultation with state, local governments and the community has been included in response to the region's expected changing population, both in size (5.3 million people by 2041) and demographics.

Within the Draft Plan the Sunshine Coast has been forcasted to accommodate 94,200 additional dwellings by 2041 by placing strong emphasis on diverse living opportunities within the Sunshine Coast. Great importance is placed on infill growth around major urban centres and along a planned coastal passenger transport trunk corridor, which is complemented by major greenfield growth on its southern and south-western edges where public transport can be extended with ease.  As made evident within the Table below, it is envisaged that the Sunshine Coast will have a major swing in accommodating the growing population, with 64% of population growth to be housed within infill development of existing urban areas (previsouly only 38%) and 36% of the population growth to be housed via new greenfeild development (previously 62%). 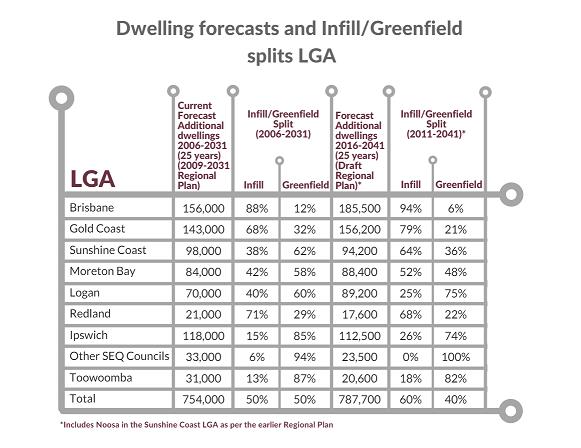 The most significant change to the Urban Footprint within the Sunshine Coast features the inclusion of 3,200 hectares of land that is directly east of Beerwah, reffered to as 'Beerwah East'. The Draft SEQ Plan outlines that 'Beerwah East has been included in the Urban Footprint to acknowledge its potential to provide important land supply in the northern corridor. It integrates with Beerwah and is serviced by road and a passenger transport trunk corridor. Sunshine Coast Council and the Queensland Government will start resolving planning and infrastructure issues to ensure its availability for urban development within the next decade' (Draft SEQ Regional Plan).